Even before the global Covid-19 Pandemic, there was a debate about the end of Chinese supremacy in the world of manufacturing, not only because of the shock to the global value chain that the Coronavirus represented but also of the cumulative effects on the Asian giant, which had seen a decade of inflation and rising prices, geopolitical tensions, and slow supply.

In this scenario, one of the different options to rebuild supply chains considered by experts in the US and other regions of the world was nearshoring to Mexico as the strategy for relocating production to a neighboring country that is also a safe trading ally & a highly prosperous country.

Because of all these things, we explore in the following video the four main features that stand out for making this investment decision, according to an analysis by Colliers International.

Below is an explanation of each of these factors.

Sharing more than 3,000 Km of border limits and similar time zones, Mexico and the United States are synchronized in time and distance.

That’s why, using an optimum and interconnected highway and rail network, a shipment of merchandise or supplies from a Mexican territory to the essential United states markets takes 3-4 days of transportation, compared with 3 or 4 weeks for a ship navigating from Chinese ports.

This access proved a precious option during the hottest months of the Covid-19 Pandemic, especially at the Juarez-Lincoln custom, located on the border between Tamaulipas and Texas. That was one of the places with more merchandise traffic in the United States when the shipments from Asia dropped.

In addition, the maritime and air network allows Mexico to enter all the American territories. This connectivity enables almost every single model of “just in time” supply from the country, making the process less complicated.

The perception that the Chinese workforce is more advanced and cheaper than the Mexican workforce has disappeared almost entirely because the inflationary pressures during the last decade have made salaries in China lose competitiveness.

That’s why, depending on the consulted source, salaries in manufacturing positions in Mexico are supposed to be nearly $2 US dollars lower than the equivalent payments in China. For example, we have a graphic with data from The Reshoring Initiative. 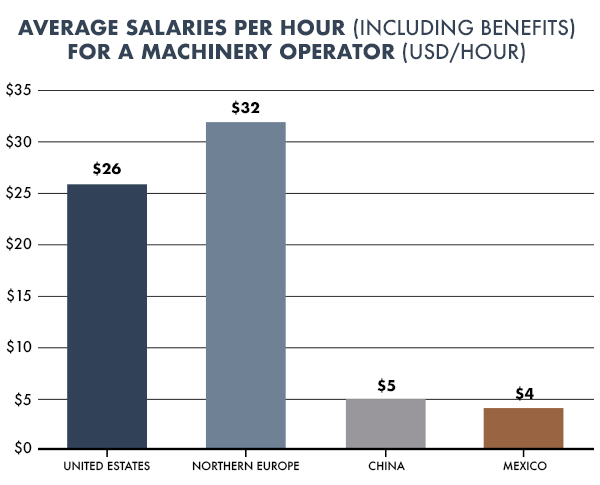 As we can appreciate, the average salaries of European and American (from the United States) machinery operators are disproportionate. Still, we must consider that these countries often offset this cost with automation.

Another thing Mexico got as an advantage is the high education of the workforce, with more than 112,000 university students getting their professional titles every year in Engineering and technical careers. They usually have work experience and speak more than 1 or 2 languages, so they are typically multilingual.

With the activation of the renewed Free Trade Agreement between Mexico, the United States, and Canada (T-MEC), some analysts talked about their worries about topics such as the original rules or the payment that could make the production costs rise in Mexican territory.

According to experts, the core of the agreement is that it brings confidence for the establishment and consolidation of regional supply chains, especially in manufacturing industries such as automotive, in which Mexico runs the top 10 most productive countries for automobiles and automotive pieces (the primary buyer is the US market).

With T-MEC, México consolidates as an exports platform that makes commerce easier by being part of a network with 13 agreements that includes more than 50 countries and that gives preferential access to the merchandise produced locally (in Mexico) to almost 1,250 million consumers around the world.

Finally, being located near the consumption market is vital for establishing supply chains. That’s why, more than sharing cultural ties, people from both countries (Mexico and the United States) have a more similar lifestyle every day. This provokes some common expectations for the products they buy.

That’s why companies in the United States have a potential additional market of 125 million Mexican citizens. This could also be a reason for the positive effect of foreign investment in Mexico.

Frontier Industrial supports the strategic areas and activities for the Mexican economy. That’s why our industrial parks in Mexico have strategic locations and services developed for investments and integration between the enterprises interested in nearshoring to Mexico that use supply chains to connect with the world. You can contact us here.